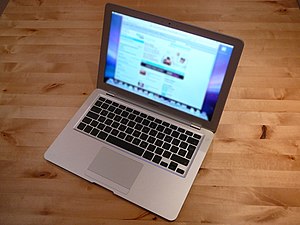 I recently upgraded my work laptop to the new MacBook Pro 17″ (2.3Ghz i7, 8GB RAM), being ever the tinkerer I was keen to replace the stock HDD for one of the latest SATA III (6Gbps) solid-state drives.

After a brief bit of research it boiled down to two options OCZ Vertex 3 240GB or, Intel S510 250GB both of which are brand new SATA III capable drives with good reviews and performance.  Replacing the drive in the MBP is a no-brainer, it’s even described in great detail in the User Manual.  With the shiny new Intel S510 SSD in-place I reinstalled OS X from the 10.6.6 DVD that accompanied the MBP.

All seemed fine after the first boot and I installed all the updates.  It was perfect until I put the laptop to Sleep, when it woke I just got the perpetual Beachball-of-Death.  Restarting seemed to alleviate the problem, but only until the next Sleep.  I did some basic things, resetting the SMC and NVRAM didn’t help.

A quick bit of Googling quickly uncovered a whole host of people with very similar problems.  Trawling through pages and pages of posts on Apple and Intel discussion forums as well as other sites I distilled a few nuggets of interesting info.

The general consensus seemed to indicate a problem with the SATA cable linking the HDD/SSD to the main logic board.  OWC had conducted their own tests and determined that poor EMF shielding along this cable as the cause.  Other enthusiasts had some luck wrapping the SATA cable with aluminium foil.

My previous restart-and-hope technique to get around the problem was no longer working, the laptop would sit with the flashing-folder icon at power-on.  However booting from the Install DVD seemed to make the SSD drive discoverable as a Startup Disk.  Delving into the System Profiler showed that from the Install DVD the Intel SSD was appearing with a “Negotiated Link Speed” of 3Gbps, not 6Gbps as its designed for.

Further investigation showed that it was still running at 3Gbps after first boot, however after resuming from Sleep the System Profiler showed 6Gbps in-between beachball delays.

It was time for drastic action, armed with a roll of aluminium foil I set about improvising my own shielding for the SATA cable.  In my humble opinion I made a pretty good job of it, neatly tucked back into its place I turned over the laptop and proceeded to install OS X once more.  Unfortunately, the foil trick didn’t help in the slightest and I was back at square-one.

Luckily I had an OCZ Vertex 3 in the office, I replaced the Intel S510 SSD and removed the foil hack.  After another OS X install, download of 10.6.7 and various other updates – everything appears to be working swimmingly.

AJA System Test reports 450-490MB/sec after first-boot, after resuming from sleep even on battery.  After trashing the system for a few hours all appears stable!

Weeks later, my laptop is still running perfectly with the OCZ Vertex 3.  While the SATA cable might be compounding the issue, I have a feeling that the Intel S510 SSD isn’t entirely blameless.