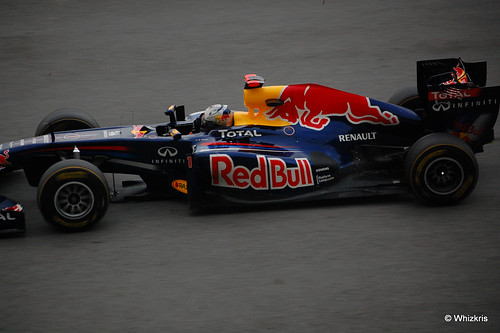 Lately I’ve been postulating ways to get some meaningful data out of social media like Twitter.  While half paying attention to a Formula One race in the background on the TV, I twigged on to an interesting experiment.  I generated a Formula One relevant filter to use with the Twitter Streaming API, whereby Twitter would send me any tweets that met my filters criteria in real-time.  Not entirely clear what I wanted to do with it, I streamed everything into a file for later.

A couple of hours later I was looking at my loot, approximately 193,000 tweet messages from around the time of the Valencia F1 race.  I refined my filter and was ready for the Silverstone race a fortnight later.  This time I captured data across the whole weekend after observing a lot of twittering in the run up to the race and for some hours later.

First things first, I wanted to gauge roughly how many people watch F1 racing and tweet about it during the race.  I briefly looked at identifying where the tweeters came from by matching their “Location” with a place name within the UK (using Geonames data) but I quickly realised this wasn’t going to work well.  So I scrapped that idea and went back to the drawing board.

I knew how many people watched the Silverstone (4.94m) and Valencia (3.93m) races from the BARB viewing data – but this only covers the UK.  Digging out the viewing figures for the 2010 season (compiled from the freely available BARB data) I managed to extrapolate that viewers in the UK accounted for 15.79% of all viewers that watched F1 last year.  With a small leap of faith (that the viewer share this year was roughly the same) I could use this to estimate how many people watched the races this year, Silverstone (31.29m) & Valencia (24.89m).

So, processing the tweets during both races I discovered…

These numbers come with a disclaimer, I am implying that everyone that tweeted was also a viewer.  I am not a statistician and the calculations here are just a rough indicator.  With Formula One inherently being an international event its likely that the viewing figures are skewed by factors such as time of day its shown and country that’s hosting the race.

What these numbers do point to is that at the moment, real-time use of social media during live TV events is quite small and likely to be a very specific demographic of people.

I’m planning to do a lot more with this data set, subject to getting time to finish the analysis code…