Despite much of the recent noise that “Social TV Is Dead” the truth is far from it and a little more complicated. In a recent piece on WIRED, Richard Kastelein makes some interesting observations about Social TV in general as well as singling out Miso and Zeebox for particular attention.

In case you’re new to the Social TV ‘thing’ it essentially boils down to this:

Social TV is a battle to ‘own’ the second-screen devices you use while you watch TV. This could be your iPad, smartphone or laptop etc.

According to industry sources, in the US 77% of people claim to use the internet while they watch TV and the race is on to see what the ‘next big thing’ is going to be on the second-screen.

Marketers naturally see it as another channel to place their brands and advertise their products. Channel operators want to use the second-screen to enhance the interactivity of their TV shows which are traditionally one-way experiences. Last but not least Broadcasters don’t want to be left out of the action because they’ve invested in acquiring the content, and ‘own’ the TV experience.

An interesting tidbit picked out from an article by Somrat Niyogi (CEO of Miso, one of the first Social TV apps) is that right now the second-screen ‘market’ of applications is massively saturated. Consumers are confused, there is no one app to go to for a seamless ‘Social TV’ experience.

There are many examples of one-off applications adding some exclusive interactive content to a big TV show, like for example The Walking Dead companion app. However once the show has run to the end of its series, the app is no longer useful and that community of users are lost to the ether.

There are literally hundreds of apps and dozens of startups claiming to be the ‘next big thing’ for Social TV with little to no tangible usefulness in this Universe (or any other). From a consumer perspective there is no clear ‘winner’ to choose from – right now there is nothing in the ‘Social TV’ market that is as revolutionary as say Twitter was for social networking.

Anyway, pontificating over lets talk about real data, real numbers. Since Zeebox launched back in October 2011 I have been collecting Social Media streams either mentioning Zeebox in some way, interacting with Zeebox or some of the people associated with it e.g. Anthony Rose. In a stunning example of foresight I must have thought “wouldn’t be cool to collect Miso data too” and so I did.

I have some idea about the analysis I’m going to do to compare and contrast between these datasets and it’s going to take a couple weeks to publish. In the meantime I wanted to share some of the hard facts about the growth and vitality of the arguably the two biggest players in Social TV at the moment.

I must caveat this with a small disclaimer, the following results have been collated by skimming through the data I’ve collected with about a dozen lines of Python to do some basic counting grouped by calendar month. Lastly, the number of Twitter users talking about either service may not be an exact measurement of their respective userbases .. but it makes for an isolated and ‘fair’ comparison.

I had no idea what to expect when I dusted off this data and started looking at what I’d collected. I’m planning to do some deeper analysis in the near future but wanted to get this basic summary out there first.  Stay tuned for future updates!

The problem with Big Data is not the Data

Fixing the Heartbleed vulnerability on CentOS 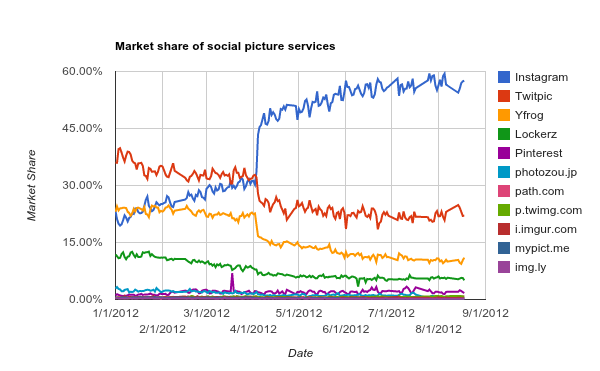